Rise and Fall of the Mission San Saba – Hunter and Dobie 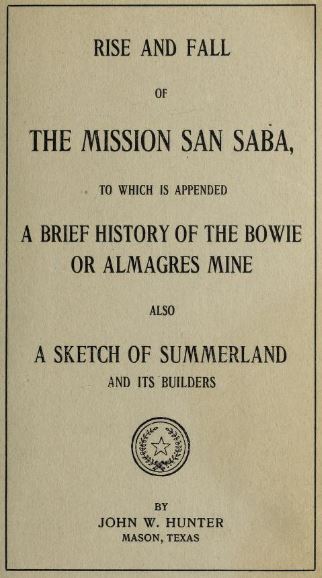 In 1905 there was a Texas Ranger’s reunion in Menardville, TX. A local newspaper man and former teacher named John W. Hunter printed up a booklet about the area, The Rise and Fall of the Mission San Saba. It had three parts–43 pages on the history of the Spanish involvement in the area, especially in regards to the mission and presidio. 22 pages on the legendary mine. And the remainder of the book was on notable citizens (in the first printing), and a sketch of the area (in the second printing).

There is a lot packed into those first 65 pages. The focus here is not so much what Hunter wrote, but what Dobie copied.

Sometimes the name of the fabled source of wealth is Los Almagres; sometimes Las Almagres; again La Mina de las Iguanas…oftener the name is simply the Lost San Saba Mine or the Lost Bowie Mine….It changes its place like will-o’-the-wisp…

From Hunter’s The Rise and Fall of the Mission San Saba:

History and tradtion all attest the existence of a silver mine so often referred to by the old chroniclers as “La Mina de las Almagres,” “La Mina de las Amarillas,” and in modern times as “The Bowie Mine.”…It was the will-o’-the wisp…

Dobie obviously read the book and borrowed not just the stories, but some of the literary flourishes as well. Most of what Dobie wrote about Silver Creek was straight from William Longworth (and that includes the La Mina de las Iguanas part), but the Bowie section in Dobie’s book is very close to the book by Hunter.

That is not altogether a bad thing. Hunter, in my opinion, was either really right, or really wrong, on everything he wrote. An example of where he was really right was his little book listing where the lost mission was, while professional historians and archeologists scampered about the countryside in a futile search for decades. It was found in the 1990’s when someone simply read his book and looked up property records (Hunter wrote that the mission remains were on the old Hockensmith place) and sure enough, that lot of land had the remains. Hunter showed up in the area in the late 1800’s. He saw the presidio mostly as the Spaniards had abandoned it. He saw the debris of the mission. He spoke to people who had spoke to Bowie, et al.

But at other times, he was really wrong. He did talk to a lot of old timers, and sometimes they knew what they were talking about, and sometimes they really did not. Or they had picked up idle gossip along the way, and made it respectable by telling it as a card-carrying old timer. That includes the account of Bowie being adopted by an Indian tribe and so discovering a cave full of silver bars. That is, properly, folklore, and Dobie was, well, doing his job as a folklorist by including it in his book.