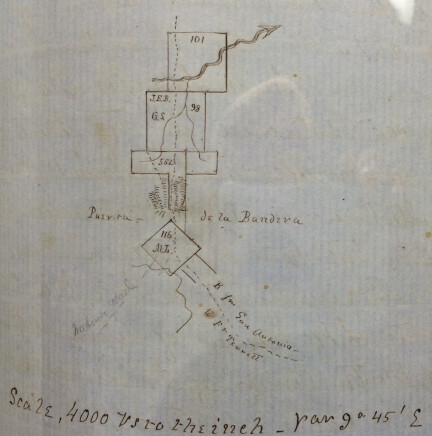 The Carretera Secundaria de la Bandera1 , was the back road (first used as an Indian trail for centuries) that Captain Joseph De Urrutia of Béxar established. It was at this time he discovered the Puerta de la Bandera2, in the winter of 1739 during his campaign to the San Sabá region against the Lipan Apache. This mountain portal or pass is found at the head waters of Bandera Creek (Bandera County) in the valley near Vendara Pass3. Vendara Pass, as it was rarely referred to by some of the earliest settlers of Bandera, Texas, was used by the Lipanes to make their raids on the city of San Antonio de Béxar.

Captain Urrutia left San Antonio de Béxar heading northwest traveling through eastern Bandera County to what is today’s Bandera Pass into Kerr County. From there he headed northwest through the center of Kerr County on into Kimble County just above the forks of the Rio de la Llanos where he turned due north toward Menard County. In 1745, after Joseph De Urrutia’s death, his son, Captain Thoribio De Urrutia, made his “questionable” raid against the Lipan Apache using the same route his father established during his 1739 campaign4. This trail or “back” road to the Mission Santa Cruz De San Sabá and the presidio San Luis De Las Amarillas was occasionally used, but not as often as the trail that became known as the “Old San Sabá Trail.”

The “Old San Sabá Trail” left San Antonio de Béxar in a more northerly direction crossing Balcones Creek (near Boerne, Tx.), crossing the Rio Guadalupe east of today’s Comfort, Tx.. It then turned north at the Kerr County line and then turned back to the northwest crossing at the headwaters of the Pedernales River and then the Llano River, and then meandering north and northwest, traveling west following the Rio San Saba to the mission Santa Cruz De San Sabá and on to the presidio San Luis De Las Amarillas. We know James Bowie and his group traveled the “camino…de la Bandera” because he stated so in his 1831 report to Governor Ramón Músquiz5.

James Bowie’s entrada left San Antonio de Béxar following the “Old San Sabá Trail” to the Balcones Creek, where they turned on the Carretera Secundaria de la Bandera heading west. This road followed the Balcones Creek west to the most eastern tip of Bandera County, following the then Seco Creek (today’s Beekman Creek) west, crossing Madreno Creek just north of where it ties into Seco Creek (today’s Red Bluff Creek). From there still heading west it turns south along/near today’s Hwy. 46 until it turned west again at the intersection of Hwy. 46 (the 1850 old stage coach stop). From there the trail headed west crossing the La Segura (today’s Pipe Creek) at Pipe Creek, Tx., and then crossing the Saint Julian (today’s Privilege Creek-just northwest of Hwy. 16 and southeast of “Polly’s Peak)6. The trail went around the southern side of Polly’s Peak and traveled northwest to the eastern side of the headwaters of Bandera Creek. The Carretera Secundaria de la Bandera then passes through the Puerta de la Bandera (Bandera Pass) into Kerr County.7

From there the Carretera Secundaria de la Bandera heads due north where it reaches the Rio Guadalupe turn west and following it on the west side until it crosses the river northwest of today’s Kerrville. It then follows the river on the north side of the river where it then follows Minter’s Creek (today’s Johnson Creek) on to near Mountain Home, Tx.8 Bowie and his group followed the “camino…de la Bandera” to the area where the Rio de la Llanos forks north and south. From here I believe they explored the headwaters of the Llano River and then to the east to the El Chimal (James Creek) where the “Red Bluffs” are located (where in 1753 Galvan reported possible “rich mineral deposits”). The Bowie entrada possibly explored to the Los Almagres region and then traveled back west on the “Old San Sabá Trail” to the area around the site of the San Sabá Mission?


Ray Carter wrote this article. His author page and a link to purchase his book on this subject and others click here